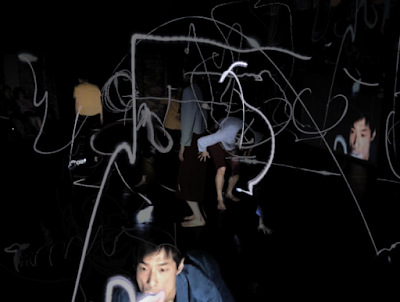 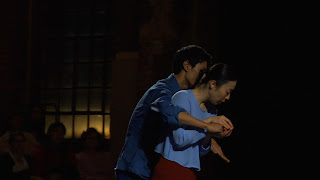 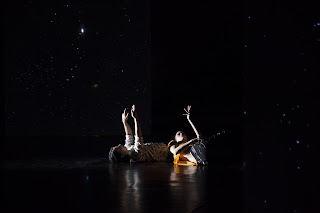 You can watch the entire performance as far as abstract objects at the following address:

Enjoy! And let us know, what you think! 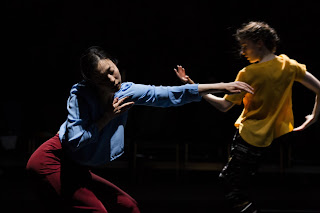 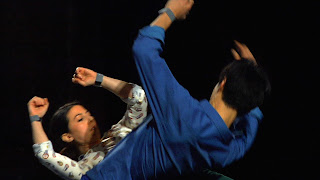 The upcoming symposium of the Association for the Study of the Arts of the Present, ASAP/8, wil take place in Tartu, Estonia, 3-5 September with the topic Alternatives to the Present and poses the question:

How and to what ends do the contemorary arts conceptualize, represent, and model new spaces and temproalities?

Foteini Papadopoulou will present the concepts developed for afaao with a paper titled:

“What do you see, when you observe movement?”
In the project ‘as far as abstract objects’ (2014, Essen, Germany) an international team of artists, scientists and technicians worked together, researching movement perception by creating a contemporary multimedia dance performance. With analysis/composition tools such as concepts from movement notation, architecture, probability theory, sound analysis, 3D-animation and motion tracking, the team worked collectively on imaginative intermediate movement transformations and the development of corresponding space and time concepts.

Two media were used in the performance, complementing the dancers’ live movements: digital media art based on processing live video feeds and space filling electronic sound installation. Their employment aimed at augmenting the restricted space-time of a live performance, opening up alternative views on a movement’s fleeting moment, articulating and communicating its hidden dynamic structures. The choreography unfolding was dealing with the tensions between fundamental aspects of movement, e.g. sequentiality/simultaneity, change of location/rotation, gesture/transference of weight. The space that live movement, animated image and sound co-inhabited was arranged to suit the performance’s intended ‘game of perception’: With the stage placed centrally and two projection screens hanging from the ceiling as a key structuring element of the set, each member of the audience would view and experience a slightly or considerably different version of the events, depending on the location of their seat.

‘as far as abstract objects’ can be viewed as a comment on the fact, that what we see is just what we see, an event perceived with the restrictions of a live experience’s temporal and spatial coordinates, i.e. the one moment in time and the one perspective on space. However, a body’s movement is a complex four dimensional phenomenon and a shift in the line of time or a change of perspective can often reveal a new surprising experience of the same event. 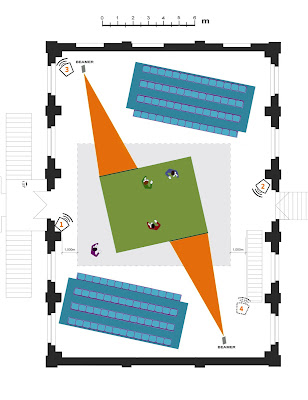 The space arrangement of afaao for the Maschinenhaus Essen 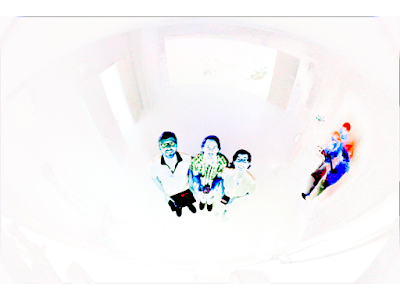 The 3rd International Symposium on Movement and Computing, MOCO'16, took place in Thessaloniki, Greece, in July 2016 and, as you can see at the picture above, we had the pleasure to celebrate a small afaao-reunion there.
The team's media artist Martin Schulte, composer Lukas Tobiassen, and choregrapher Foteini Papadopoulou presented an installation version of the afaao's main idea in the symposium's venue, the Thessaloniki Concert Hall - M2.

as far as abstract objects - the installation

In this interactive installation a camera hanging from above captures the visitors’ movements on a defined area. By acculumating a number of video frames into one, they produce ‘movement paths’ which reveal the interrelation between spatial and temporal aspects, fundamentally inherent in movement.
Additional abstraction effects, selectable on an interface by the viewers themselves, allow visualization of the movement patterns in different ways. As for the interaction between movement and sound, the video feed is analyzed on the quantity of motion by frame-differencing: The more the visitors move, the more impulse they give to trigger the sound. 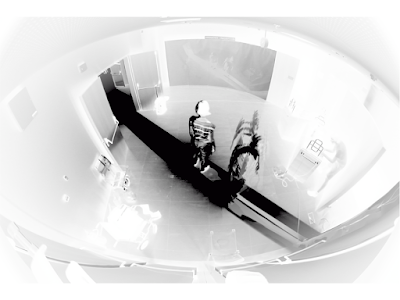 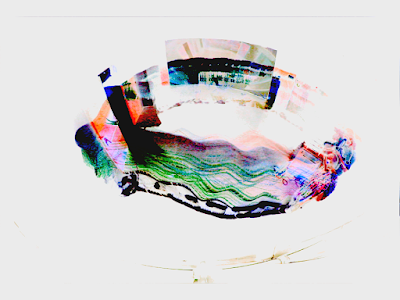 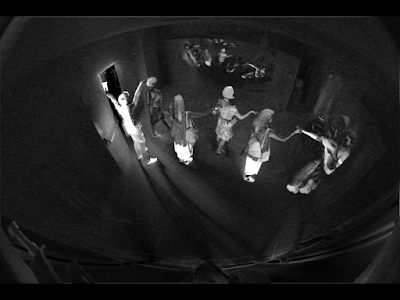 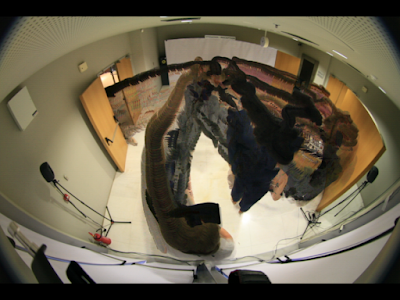 Further, Foteini Papadopoulou and Martin Schulte contributed to the symposium with a long paper titled:

Movement Notation and Digital Media Art in the Contemporary Dance Practice: Aspects of the Making of a Multimedia Dance Performance
This paper presents some of the aspects from the creative process leading to the multimedia dance performance ‘as far as abstract objects’ (‘afaao’). The creation of that stage work was at the same time an extensive experimental transdisciplinary research, a laboratory for movement analysis and movement composition. In particular, this paper will elaborate on the relation and collaboration between two of the fields involved, movement notation and media art. In ‘afaao’ fundamental principles from movement notation were paired with possibilities from modern media technology. The common ground they shared was the transformation process that movement undergoes when working with notation as well as when working with media art. The objective of this collaboration was to explore the complex phenomenon of movement and to create a work of art that would communicate the research revelations in a visually engaging way with the audience, offering alternative views on the movement’s dynamic structures.
---

The paper was published in the Symposium Proceedings by ACM, the Association for Computing Machinery, and can be found at the ACM Digital Library under the International Conference Proceedings Series.
Article DOI: http://dx.doi.org/10.1145/2948910.2948929

The 29th Biennial Conference of the International Council of Kinetography Laban / Labanotation took place in Tours, France, in July 2015 and the work of afaao was represented in a long paper by Foteini Papadopoulou titled:

Movement analysis principles of Kinetography Laban as tools for dance composition:
the artistic research project as far as abstract objects

This paper aims at presenting possibilities for the systematic and yet creative usage of principles from movement notation for the contemporary dance practice of compositional processes. Further on, a concrete applied work methodology and its results will be presented at the example of the artistic research project and the multimedia dance performance as far as abstract objects. 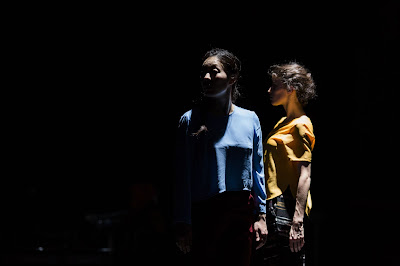 The Conference Proceedings with the full paper will be published in autumn 2016.
Eingestellt von Unknown um 12:53 Keine Kommentare: 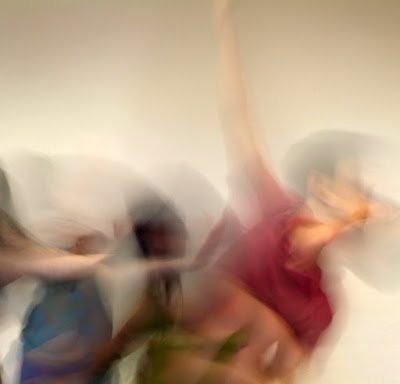 (for english please scroll down)

Dear friends of the 'abstract objects',

in the framework of the inaugural TANZRAUSCHEN - International Dance on Screen Festival that takes place in Wuppertal from January 28 to 31, choreographer Foteini Papadopoulou and media artist Martin Schulte from the team of the afaao-project will be giving a workshop on Saturday, January 30, on the following subject:
Movement Notation Principles as Tools for Scriptwriting for Dance on Screen / Choreography for the Camera

The workshop is conceived to equally appeal to dance practicioners and film makers / media artists as well as to students of these fields. 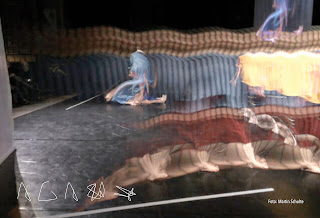 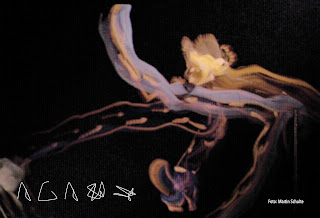 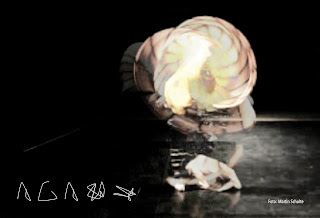 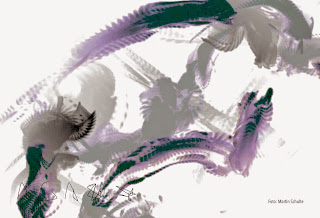 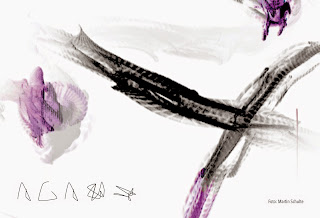